Remember that classic image of having a ‘good little angel’ and a ‘bad little devil’ telling us what to do? Well for some people this is an actual experience. The story of Peg’s ‘Guardian’ Angel’ and ‘Little Devil’ may be found in chapter 7 of the book Voices of Reason, Voices of Insanity by Ivan Leudar and Philip Thomas. This article shares some background info about the hearing of voices and gives examples of how such experiences are currently being simulated (or could be) in order to better understand the phenomenon. 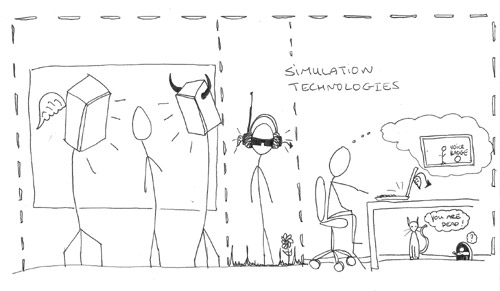 Accounts of hearing voices have been recorded for over 2000 years. Well-known voice hearers of history are considered Mohammed, Pythagoras, Joan of Arc and Socrates. Socrates voices came from what he called his daemon, and it was not considered all that unusual. Julian Jaynes claims that before the second millennium BC, everyone heard voices and that voice hearers today are remnant examples of what he calls the breakdown of the bi-cameral mind. It is believed that about 5 % of humans hear voices on a regular basis. These voices might comment continuously on what you are doing. They may be experienced as young, old, robotic, male or female. They might sound like they are from your friends, family members who have ceased, strangers or aliens. The voices could be experienced as divine, wise, loving and guiding as well as malignant, derogative and demonic. The voices may give you compelling assignments that must be acted upon. They can be sensed as coming from outside ones head, in walls, or inside ones head. The voices can be one-word whispers or shouts. They can hold complete conversations and intricate narratives making the person engaging with them often talking out loud in reaction. Often several voices can be talking at once. Hearing voices can be a one-time experience or an experience that lasts a lifetime. A peculiar thing is that deaf people can hear voices too. In spite that the Dutch psychiatrist Marius Romme discovered that a large number of Dutch people hear voices without needing psychiatric care, hearing voices is still often seen as one of the key symptoms of mental health problems.

That hearing voices can be an intensely confusing and tiring experience may be derived from Elyn Saks, author of the book The Centre Cannot Hold, My Journey Through Madness, who describes her experience as: imagining yourself sitting in a room, then turning on the stereo, the television, a loud video game simultaneously, then inviting a bunch of ice-cream eating toddlers and then turning up all electrical appliances and take away the ice cream from the children. She asks us to imagine that this would continue day and night. Looking at The Scream by Edward Munch might generate a good impressions about what it is like to hear negative voices, but in order to aid our imagination, a number of simulations have been developed.

An effective non-tech exercise that simulates what it is like to hear voices is put forward by Ron Coleman to give mental health workers and relatives some insight into what it is like to hear intrusive, negative and commanding voices. The exercise consists of forming a group of three or four people in which one or two people take on the role of ‘the voices’, another as the ‘voice hearer’, and a person with whom the voice hearer is conducting a conversation. The voices speak close to the ears of the voice hearer making personal derogative remarks, while the voice hearer attempts to have a conversation with the other person.

In recent years, there have also been several multimedia simulation projects that have been created in a scientific context as virtual teaching and awareness environments. Two such projects are from the pharmaceutical company Janssen-Cilag. One consists of a virtual reality headset in which voices are simulated with the use of headphones while watching a hallucinatory animation. The other project is called Paved with Fear, in which one stands in a cinematic cubicle travelling in a truck. The floor shakes while an array of sounds and voices come from surround sound speakers. At the same time a mischievous piece of software integrates the whispering of your name by a male electronic voice. 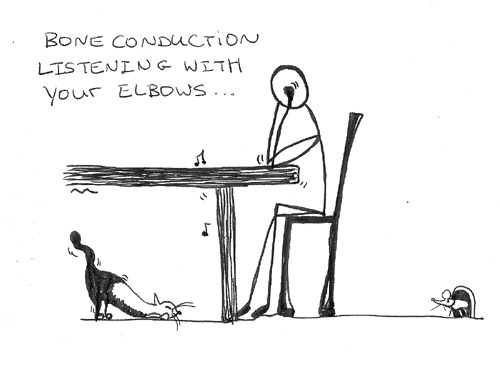 Another project may be found on Second Life, called the Virtual Hallucinations project developed by Queensland University and UC Davis. For this project a little piece of software was developed and presented to avatars male or female VR voice-badge. Once the voice-badge is put on, one may walk through the virtual hallucinations and listen to voices coming from your computer telling you that you are worthless and dead. Although unclear if intended, sometimes one continues to explore Second Life without being able to switch the voices off! One of the key issues that make the experience of hearing voices so terrifying might be that no one else can hear them and that there is no obvious sound source. How to simulate that?

In order to do this, one might think about using what is called an Audio Spotlight. An Audio Spotlight allows for a person to aim a beam of sound at a person while a person standing one meter away hears nothing. Inspiration for further development of voice hearing simulation projects might also be found by combining aspects of artworks from Janet Cardiff and Laurie Anderson. Janet Cardiff has used binaural recording. This involves a particular positioning of microphones in the location of ears on a dummy, thus simulating human hearing in a way that pinpoints a location. What if the sound source for the recording is placed within the head of the dummy?  Laurie Anderson used bone conduction to transfer sounds. This is done by holding ones palms to ones ears and placing ones elbows on a table, allowing one to hear sounds transferred via the table through ones bones to the inner ear. What if there are voices instead of sounds coming through ones bones?

If one combines the two techniques in a wearable form, perhaps inspired by The Bone Phone of the seventies, one would have a device that allows for a wearer to hear inner voices through ones bones, without a person standing next to you hearing it. If one could somehow make the voices react real time to the wearers actions in an environment one might get closer to understanding that experience of a ‘little devil’ and ‘angel’ on ones shoulders.